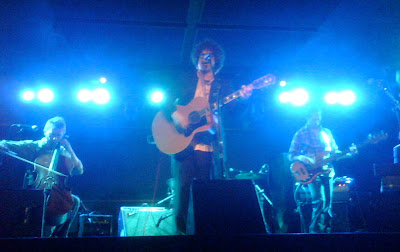 Fought the Bear with their bare hands: Lucinda Black Bear
I know... C. Gibbs again, but sorry, the man is just rising to incredible musical heights with his band Lucinda Black Bear as witnessed Friday night at the Knitting Factory, now in Williamsburg, two blocks from Union Pool (take a walk with street view here. And anyway, there's more. The songs mix the legacy of the Byrds with the Beatles and then come back to haunt you with a powerful orchestral punk - with cello, violin, acoustic guitar and bass. And not only C. Gibbs is a great showman, drummer Kristin Müller is such an entertaining performer, her antics alone are worth the money. Plus: Have you ever seen a cello player standing, holding his instrument like a guitar god over his head before launching into the finish? - That's Chad Hammer for you. Mike, thanx! 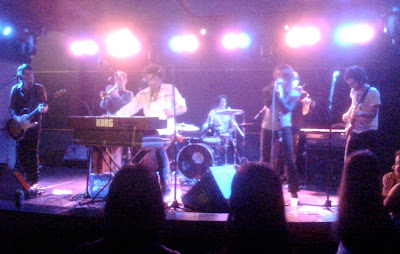 And all the girls went wow: Botanica

Fired up by the set of their forerunner, Botanica played their last stateside show before heading to Europe, where a quite extensive tour with Nikko Weidemann follows (Switzerland: Go see them in Winterthur, Basel, Berne, St. Gall and Lucerne!). Most impressive was not Dresden Dolls drummer Brian Viglione who even took of his shirt off to top Kristin Mueller's show, but despite trying hard, did not succeed. No, it was the songs with Dana Schechter of Bee And Flower fame who, for once without the bass, belted out to songs with a contagious energy. And a supreme Paul Wallfisch with absolutely no sound problems. Do we need to mention that, of course, John Andrews' guitar playing was impeccable?
Posted by Roman Elsener at 12:24 PM 11 comments: